On June 18 and 19, 2022, several villages in the Bankass circle in the Bandiagara region of central Mali were attacked, resulting in more than 132 civilian casualties. On July 21, Douentza, Kolokani, Koro, Bapho, Segou, and Mopti were attacked. The next day, it was Kati. Then Sévaré on July 24, Kalumba, Sokolo and Mopti on July 28. Attacks and raids against FAMA have never been so numerous in a short period of time. They totaled twelve coordinated attacks, if not simultaneous, in the space of one week, a record among the cycles of violence observed every year since 2012. The consequences were not long in coming. Indeed, on Friday, July 29, 2022, the U.S. Embassy in Mali ordered the departure of U.S. government employees and their family members residing in the country “due to the increased risk of terrorist attacks in areas frequented by Westerners.” On July 30, 2022, in response to the resurgence of terrorism and attacks in Mali, El Hajj Younouss Hamèye Dicko, president of ATIR (Alliance for Smart and Successful Transition), said in an official statement that the Malian government must implement a war budget, equivalent to at least 37% of the national budget. This budget will be made available to the Defense and Security Forces to fight terrorism and to carry out massive recruitment in the Army.

Security situation on the field

While observers might have expected a weakening of al-Qaeda following the neutralization of bin Laden’s successor, the Egyptian Ayman Alzawahiri, in Afghanistan, the opposite is being observed on the ground. Indeed, a renewed dynamism and terrorist actions are once again drawing attention to this jihadist movement. While one might have expected the system to run out of steam, the thirst for vengeance is igniting the actions of fighters, resulting in a resurgence of suicide attacks in Mali. These are not desperate acts to save a sinking ship; on the contrary, the death of their supreme guide will undoubtedly, under the banner of revenge, create new vocations and increase the rate of recruitment. 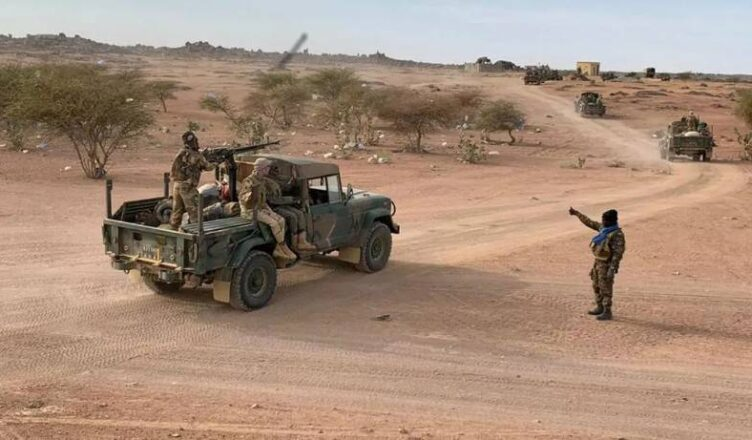 Today, Mali has reached a stage where the terrorists have gained confidence and freedom of action on the ground. They now know that the constraining factors are no longer present. Indeed, the military and police contingents of Minusma are no longer sufficiently mobile, the Barkhane force has left Malian territory, and the foreign forces of the G5-Sahel are virtually absent. This new situation gives the terrorists more room to maneuver, especially considering that the Malian army has difficulty securing the entire country at the same time due to its size. Moreover, its deterrent capabilities have been further reduced by the fact that the Russian mercenary group Wagner has shifted its priorities from Mali to Ukraine. Russia has not been able to realize its ambitions on the ground in accordance with an agenda that was supposed to be immediate. Recalled as reinforcements in the war in northern Europe, Russia hopes that the Wagner group will bring more weight to the balance of power on the ground in Ukraine. These various foreign forces were a deterrent to the terrorists, who were forced to limit their movements for fear of clashes and casualties.

Methods and logic of terrorists in Mali

Each time the state attempts to re-establish itself in an area of Mali, armed jihadist groups carry out sporadic attacks to assert their presence, to mark their territory in these areas. Their primary goal is to break the momentum of an eventual return of the state, particularly in northern Mali, and to discredit its actions. The cycles of terrorist attacks are based primarily on exploiting loopholes in the security apparatus. Terrorists also favor areas where, historically, there have been tensions and sometimes conflicts between socio-professional categories, particularly between herders and farmers. What is original today is the instrumentalization of these tensions by armed groups described as jihadists. However, the results of this latest upsurge in terrorism in Mali show that the attackers are increasingly targeting localities close to the Malian capital Bamako.

Terrorist attacks in Mali can be divided into two broad categories. Small-scale attacks in the form of harassment to force the Malian Armed Forces out of the protection of their barracks and into areas suitable for ambushes or mine or IED traps. These attacks cause many casualties among the ranks of the Malian security forces and armies, and few casualties to the attackers. This is also the case for convoy harassment or village attacks. This type of attack dilutes the forces over a large area of confrontation and is very difficult to control both in space and time. The aim is to discredit government forces, to re-establish the supremacy of armed terrorist groups through terror, to dissuade the population from denouncing and collaborating with state representatives, or even to resupply themselves with food and currency.

On the other hand, large-scale attacks are aimed at demonstrating strength, gaining control of an area, and weakening the national armed forces on the ground. This is demonstrated by attacks on large compounds or cities. Even if this type of attack remains very costly in terms of human lives, the media impact and provocation remain strategic.
In all cases, the objective is to return to the basic concept of terrorism. It is no longer necessarily to kill at first sight but rather to create panic and disturb public order. Their missions are all the easier to carry out since the departure of Barkhane, and the lack of convincing results from Russian mercenaries.

It should be remembered that the transitional authority was counting on the Russian mercenary group Wagner, who claimed at the end of 2021 that in the space of six months he would have resolved the issue of terrorism in Mali. 10 months later, despite his interventions, this is still not the case. On the contrary, the figures show that they have not lived up to their ambitions. However, its actions are particularly praised by the transitional authorities. Nevertheless, the situation in Ukraine, not bringing all the expectations of Russia in the expected time, forces Wagner to lighten his device in Mali. The departure of its mercenaries has deepened the void already created by the departure of foreign forces.
Faced with this change in the security landscape in Mali, the military authorities will have no choice but to review their strategies for fighting the jihadists on the ground.

What has been observed for some time is that the groups have multiplied in recent years and their area of activity has increased considerably. Moreover, if the terrorists are no longer able to carry out exploits against the military, they will not hesitate to attack civilians, as they are currently doing in central Mali and other parts of the country, bringing the nation’s economy and development to a standstill.

Pending a convincing solution, jihadist groups are carrying the terrorist threat from the Sahel to the countries of the Gulf of Guinea. As evidence, after attacks in Ivory Coast  between 2019 and 2020, they are now targeting Benin and Togo.

We use cookies on our website to give you the most relevant experience by remembering your preferences and repeat visits. By clicking “Accept All”, you consent to the use of ALL the cookies. However, you may visit "Cookie Settings" to provide a controlled consent.
Cookie SettingsAccept All
Manage consent

This website uses cookies to improve your experience while you navigate through the website. Out of these, the cookies that are categorized as necessary are stored on your browser as they are essential for the working of basic functionalities of the website. We also use third-party cookies that help us analyze and understand how you use this website. These cookies will be stored in your browser only with your consent. You also have the option to opt-out of these cookies. But opting out of some of these cookies may affect your browsing experience.
Necessary Always Enabled
Necessary cookies are absolutely essential for the website to function properly. These cookies ensure basic functionalities and security features of the website, anonymously.
Functional
Functional cookies help to perform certain functionalities like sharing the content of the website on social media platforms, collect feedbacks, and other third-party features.
Performance
Performance cookies are used to understand and analyze the key performance indexes of the website which helps in delivering a better user experience for the visitors.
Analytics
Analytical cookies are used to understand how visitors interact with the website. These cookies help provide information on metrics the number of visitors, bounce rate, traffic source, etc.
Advertisement
Advertisement cookies are used to provide visitors with relevant ads and marketing campaigns. These cookies track visitors across websites and collect information to provide customized ads.
Others
Other uncategorized cookies are those that are being analyzed and have not been classified into a category as yet.
SAVE & ACCEPT